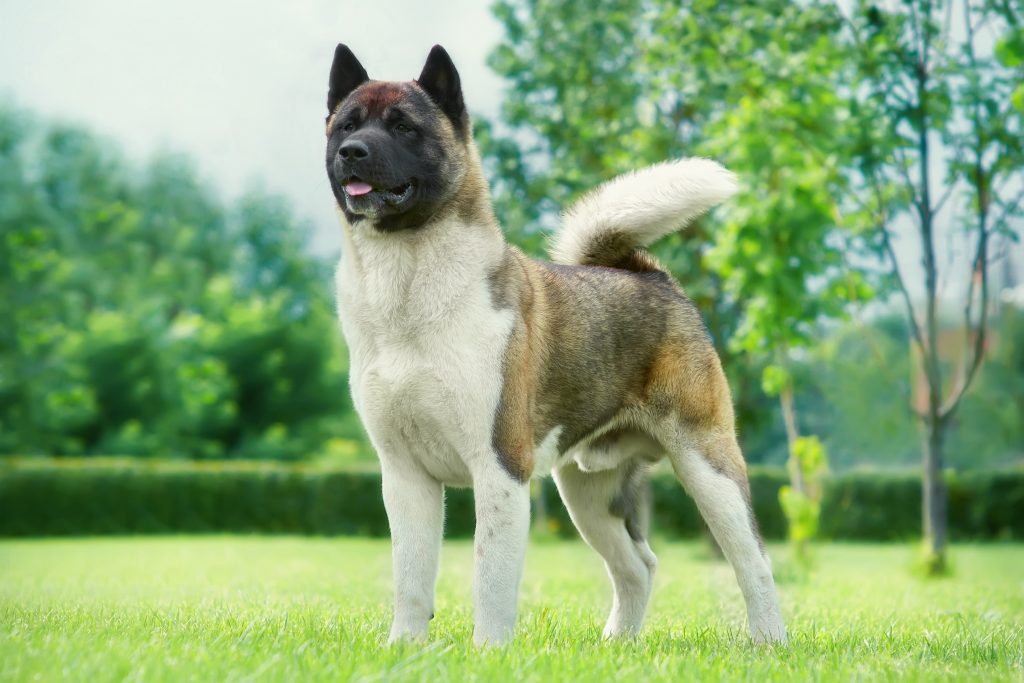 What the American Kennel Club recognizes as the "Akita" breed is what every other country recognizes as the "American Akita". There is also a breed called the "Japanese Akita", or "Akita Inu", that is not recognized by the American Kennel Club. However, the American Akita and Akita Inu have a joint origin story, starting in the 17th century in northern Japan. Story says that a Japanese emperor banished a nobleman to the northern prefecture of Akita, the northernmost province of the island of Honshu, where he was to serve as the provincial ruler. This nobleman was a dog enthusiast and sought to breed a large, versatile hunting dog that would be able to work in the harsh climate. Over generations, the Akita Matagi was born, a large, spitz-type dog that was adept at hunting large game including the Yezo bear, guarding households, and serving as a loyal companion.

Unfortunately, the Akita Matagi eventually found its way into dog fighting rings. Over time, the dogs were bred with mastiffs and other large breeds to improve their fighting abilities. Once dog fighting was outlawed in 1908, the Akita persisted as an even larger breed with less of the spitz characteristics. During World War II, resources were low and the Japanese police ordered the confiscation of all non-military dogs. In a drastic attempt to save the breed from extinction, Akita enthusiasts bred their Akitas with German shepherds so they could claim them as military dogs.

Once the war ended, there were 3 types of Akitas in Japan: Matagi Akitas, Fighting Akitas, and Shepherd Akitas. This made the restoration process complicated, and different breeders were taking different approaches in their breed lines. One breeder started the "Dewa" line, which was heavily influenced by mastiff and German shepherd characteristics. These dogs became popular amongst members of the military, and were the ones that were eventually brought back to America.

The Akita gets its name from its place of origin: the Akita prefecture of northern Japan. In every country except the United States, the Akita is broken into two separate breeds: the Japanese Akita (Akita Inu) and the American Akita. The American Kennel Club recognizes only the Akita breed, which is what all other countries consider to be the American Akita.

The Akita is a large, heavy-boned, spitz-type breed with a massive, broad, bear-like head. They have small eyes and erect, triangular ears that are set at a slight angle following the arch of the neck. Their double coat is short and can be any color including white, brindle, or pinto (large blotches of color on a white background that cover about 1/3 or more of the body). Many Akitas have a face mask or blaze, which is a white stripe running up the center of the face between the eyes. White Akitas have no coloration on their face. One distinctive characteristic of this breed is their well-knuckled cat-like feet. Their tails are large and full, curling either in a three-quarters, full, or double curl over their back.

Akitas have a short, thick double coat of hair. They are fairly heavy shedders and will "blow out" their coat twice per year.  Considering how large they are, they will drop a surprising amount of fur. Brushing them daily during this time can reduce the amount of fur that ends up all over your house. You'll definitely want a high quality vacuum!

Akitas make wonderful guard dogs as they are very protective of their property and family. Any potential intruder would likely be deterred after just one look at a large, powerful Akita. They have a reputation as being extremely loyal to their family and they get along very well with children. That being said, it is essential that children learn good dog manners and that dogs are socialized to young children before they interact. All interactions between dogs and children should be monitored. Around those they love, Akitas are affectionate, friendly, and social. It's important that Akitas get to live in the house with their family as they are very family-oriented. It's other dogs and people that they aren't too fond of. Akitas, especially if they are not properly socialized, can be wary or even intolerant of other animals and strangers. While wary at first, they generally warm up to strangers in time (as long as they can tell that you trust the stranger in question). It is said that they tend to have most problems with other dogs of the same sex. This is a breed that would do best as the only dog in the house.

Akitas have some unique and interesting characteristics. First, they are extremely clean and fastidious. They are known to lick and groom themselves like cats. Another characteristic that they share with cats is their hunting style; Akitas will stalk their prey silently by crouching low to the ground before pouncing. Secondly, Akitas are very mouthy, carrying things around the house in their mouth or gently putting their mouth around your wrist to lead you to their leash. This can be used to an Akita's caretaker's advantage, as they can be easily trained to fetch the newspaper or household items. Lastly, Akitas are generally very quiet, barking only when necessary, but are very vocal. They are known to mumble, grunt, and make other vocalizations.

Considering Akitas were bred to be independent thinkers, these dogs are highly intelligent but can be a bit willfull and stubborn. They may try to take control of the household and assume the dominant role if they are not properly trained. It is important that their caretakers are firm, consistent, and confident when training and interacting with their Akita. As a rule of thumb, this probably is not the breed for first time dog owners.

The Akita is an intelligent and loyal breed but that doesn't necessarily mean that they're eager to please. They are also headstrong, independent, and known to naturally assume the positive of pack leader in the household. If your Akita starts to show signs that they they are assuming the role of alpha, there are ways to reastablish yourself as "leader of your pack" (read more here.) According to the American Kennel Club, it is essential that Akitas are trained consistently starting in early puppyhood. You may want to consider enrolling them in puppy classes between 7-16 weeks and positive-reinceforment-based obedience classes afterwards.

Early socialization is especially important for Akitas due to their protective and wary nature. The more strangers they accept early in life, the less likely they will be to perceive strangers as a threat later on. For all dogs, the more people, places, dogs, noises, etc. you expose them to early, the better they will be prepared for life later.

According to the Akita Club of America, Akitas tend to feel uneasy around other dogs, especially of the same sex. It is important to use extreme caution during canine interactions. Due to their independence and strong prey drive, it is advised that they are kept on a leash when not in a secured area.