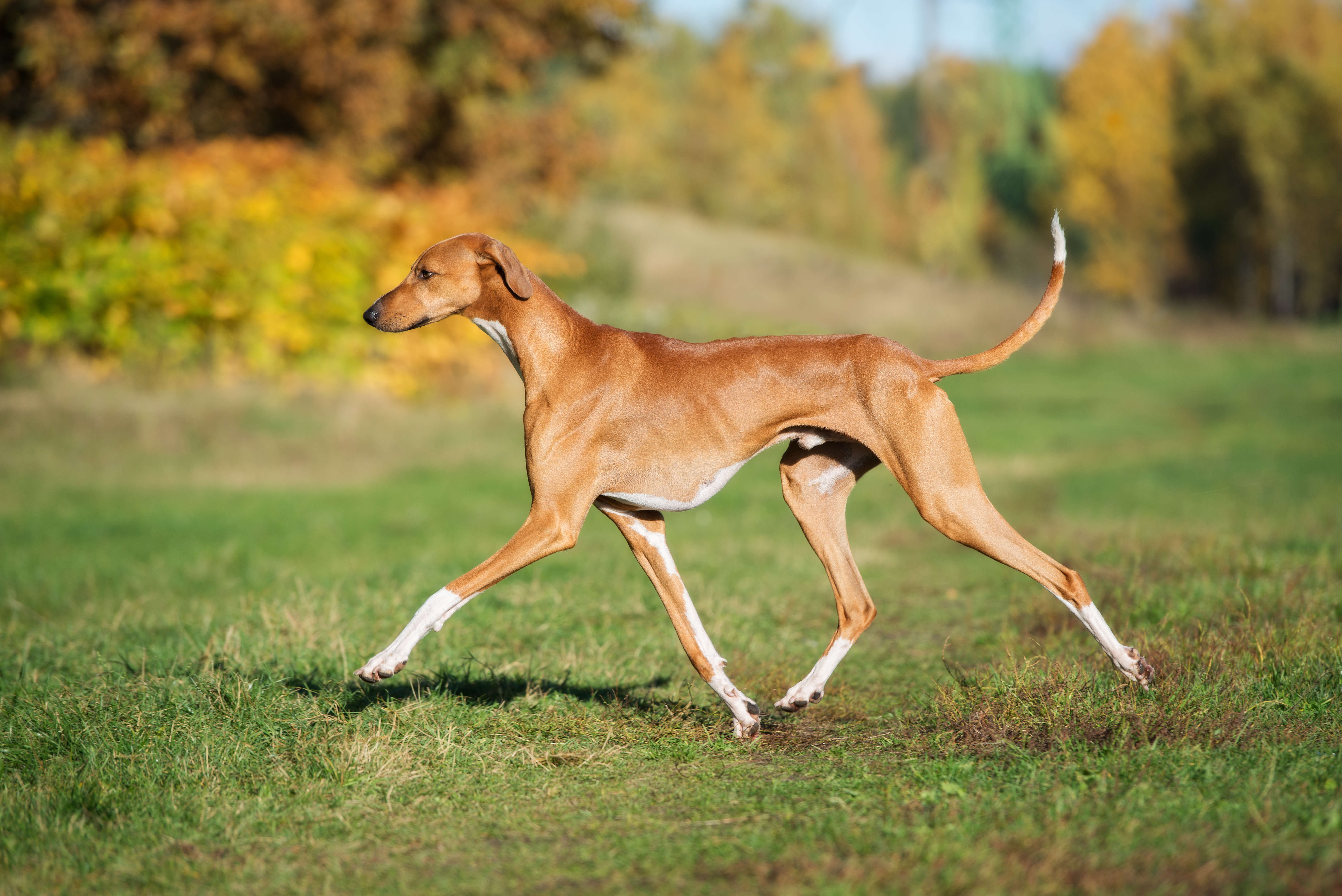 The Azawakh originated thousands of years ago in Mali, Niger, and Burkina Faso in Africa as a sighthound and secondarily, as a guard dog and companion. They were originally rasied in the Sahel region of the Sahara Desert by the Tuareg and other ethnic tribes of the southern Sahel. While the harsh conditions of the region implemented their own selective pressures, the Sahel nomads selectively bred the dogs for aesthetic and strength. Generally, the alpha male dog was selected to be the sire to a pool of culled females. Both selective pressures from the environment and the breeders produced a dog with impressive agility and stamina that can survive high temperatures and is not prone to injury.

These dogs were treated as members of the family and were allowed to live in the house with their people. In addition to hunting the hare, antelope, and wild boar of the region, these dogs also protected the encampment and flocks from invaders. With the introduction of firearms, the game in the region began to dwindle and the dogs' role leaned more heavily towards guarding and companionship.

The Azawakh is relatively uncommon in Europe and North America but is growing slowly but steadily in popularity. The breed was not recognized by the American Kennel Club until Janurary of 2019, and it wasn't until February of this year that the first Azawakh competed at the annual Westminster Kennel Club Dog Show.

The Azawakh is named after the Azawagh Valley, which is located within the region where the breed originated.  The original caretakers of the breed, the Tuareg nomads, called the dogs “idii n’ illeli," which translates to "sighthound of the free people." The plural of "Azawakh" is also "Azawakh".

The Azawakh shares a similar look with Middle Eastern and South Indian Sighthounds:  lean, leggy, and rectangular-shaped with a narrow head. Unlike other sighthound breeds, the Azawakh has a short, flat back with hips placed slightly higher than the withers with "dry" muscles. "Dry" muscles lay relatively flat, unlike those of the Greyhound or Whippet but similar to those of the Saluki. The breed's muscles and bone structure are visible and pronounced under their skin.  In fact, according to the American Kennel Club breed standard, at the correct weight, an Azawakh should have hip bones and a minimum of 3-5 ribs showing.

The eyes of the Azawakh are large and almond-shaped and their coat is very short, thinning to almost non-existent on their stomachs.  Azawakh can be almost any color including sand, dark brown/fawn, brindle, red, blue fawn, grizzle, and, rarely, blue and black with various white markings including Irish marked (white collar) and particolour (mostly white). Both the AKC and United Kennel Club (UKC) have no coat color standards for the breed, but the Fédération Cynologique Internationale (FCI) permitted colors are clear sand to dark fawn/brown, red and brindle (with or without a dark mask), with white bib, tail tip, and white on all feet.

One distinctive attribute of this breed is its feline-like, light, supple gait, known as an upright double suspension gallop.

This is a low-to-medium shedding breed and are generally considered good for those who don't like a lot of dog hair on their belongings. Their coats are very short and thus easy to groom. A weekly brushing and occasional bath is enough to keep an Azawakh clean and healthy.

The Azawakh is a gentle, playful, affectionate (but not clingy) breed that tends to bond strongly with one person or family. It is important that they are bonded to a certain person or family when they are puppies, otherwise they may have a hard time adjusting if placed as an adult. These dogs are protective of their family and home, and will certainly bark at strangers but should never be aggressive. If a new person enters the household, an Azawakh will likely treat them with indifference or mild friendliness. Once they warm up to people, they still won't treat them with the same love they give to their family members, but they will accept the once-stranger as a friend.

While Azawakh can do well with other small pets in the house, it is essential that they are socialized to them early due to the breed's strong prey drive. Even this will not be enough to keep them from chasing squirrels, the neighbor's cat, or running children. They were bred as sighthounds, so attempting to train this out of them will be fruitless. It is best to keep them on leashes when outside of enclosed areas.

Due to being bred for hard work in harsh conditions, Azawakh have a very high pain tolerance are will likely not show any signs of being in pain if they are injured. It's important to check them regularly for signs of injury. This also means that an underground electric fence will have absolutely no affect on them; they will blow right through it without a flinch.  Interestingly enough, despite their toughness, they hate being cold and wet.

Azawakh are intelligent dogs that learn quickly. Considering that they were bred to problem solve in the absence of their human companions on the hunt, they are also independent thinkers. This may make training a bit challenging, so this breed is not recommended for first time dog owners. The Azawakh is also one of the few pack-oriented sighthounds, and they are known to form complex social hierarchies with other dogs. They can even recognize other dogs they've interacted with after years of separation.

These dogs have moderate-to-high exercise needs and won't always be motivated to exercise themselves in the back yard. It is important to take them on daily walks or runs to keep them healthy. They are high energy with an impressive amount of endurance, so they make great running partners. As they were bred to hunt in West Africa, they can even run in temperatures of up to 100 degrees Fahrenheit, which would be impossible for other sighthound breeds. If sufficiently exercised, they will be relaxed in the household and never hyper.

Owning an Azawakh requires a firm, patient, and fair method of training. This breed responds best to positive reinforcement training and are quite food-motivated. Dominant-type training can break their spirit or cause them to become aggressive and untrusting. According to Azawakhs.org, these dogs generally do well in a structured obedience class environment with care given to the training methods employed. Beginning training with a puppy kindergarten class is advisable in young puppies. These classes afford the opportunity for socialization with people and other dogs and can be an invaluable tool in the upbringing of the puppy. Additionally, obedience training at the home strengthens the bond between hound and owner.

Early socialization is essential for all dogs and the Azawakh is no exception. It is especially important that they are continuously introduced to strangers, other dogs, and any small animal that may be living with them in the household starting at an early age. The more people, places, dogs, noises, etc. you expose them to early, the better they will be prepared for life later.