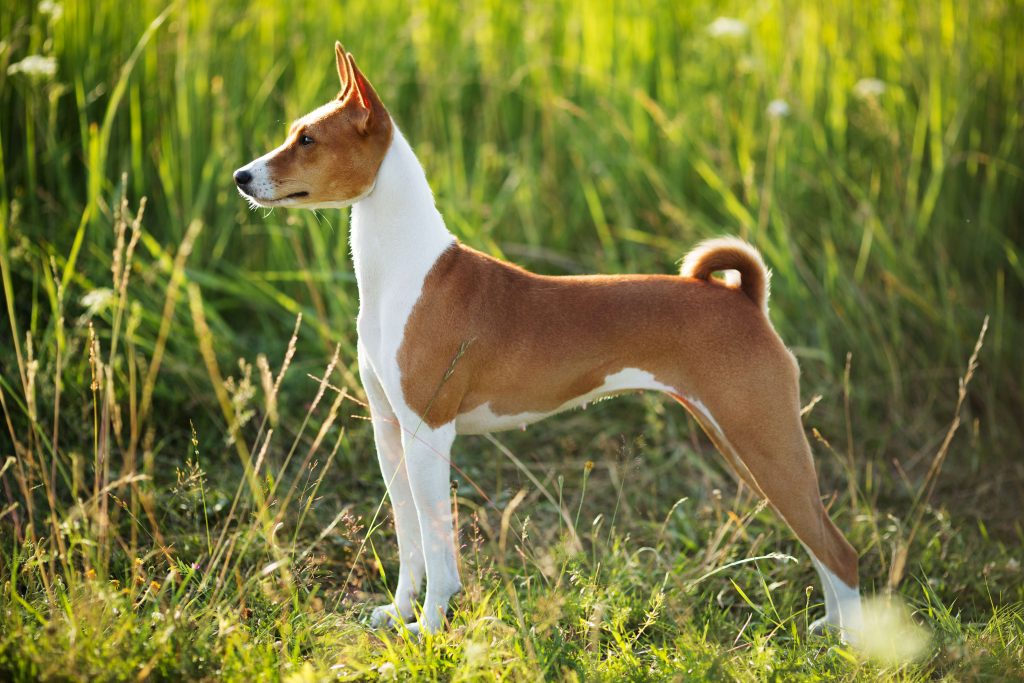 The Basenji is considered to be one of the oldest dog breeds, with evidence of these dogs dating back to the twelfth dynasty of Egypt (1991 BCE–1802 BCE). The breed's predecessors can be found depicted in ancient Babylonian and Mesopotamian art and it is believed that they were gifted to the pharaohs of ancient Egypt by people traveling up the Nile River from interior Africa. Basenjis originated in the Congo region of west Africa where they were bred as a multi-purpose dog, tasked with hunting by flushing game into nets, carrying goods, and warning their caretakers of oncoming danger. In their early years, Basenjis were pariah dogs, meaning that instead of living with a caretaker, they would free-roam around the village. Like many other pariah dogs, they lack the distinctive dog odor and only go into estrus once per year as opposed to multiple times like most domesticated dogs. A local name for these dogs is "m’bwa m’kube m’bwa wamwitu", or "dog that jumps up and down", due to their impressive vertical leap that they utilize to scout out prey. Strangely enough, Basenjis can't bark, but make a yodel-like noise often called a "baroo".  Despite their history of being feral, these dogs are known to highly dislike the rain.

The Basenji gets its name from the Congolese language of Lingala, where "mbwá na basɛ́nzi" translates to "villager dogs".

Basenjis are relatively small dogs with short hair, pointed ears, and a curled tail. One notable characteristic is that the skin on their forehead is wrinkled, particularly when they are young and when they are alert. Basenjis are "square" shaped, meaning that that are approximately as tall at their shoulders as they are long. Many colors are possible, including red, black, tricolor, brindle, and "trindle" (tricolor with brindle patches), all with white feet, chests, and tail tips.

Basenjis are known to shed very little, and the hair that they do shed is very short. They also self-groom, keeping themselves generally very clean and tidy. Like any dog, they do require an occasional brushing.

Basenji caretakers say that you need to have a sense of humor to live with one. They were bred to be independent thinkers, meaning that they are intelligent, curious, great at solving problems (such as how to get that tasty morsel from the counter top), and difficult to train. Generally, if they don't see a personal benefit to obeying a command, they won't. They are also big-time chewers, escape artists, and, due to being sighthounds, have a strong prey drive. They will not hesitate to chase after anything that moves, including squirrels, cats, and other small pets. Generally speaking, you shouldn't have small pets in the household unless your Basenji was socialized with them at a young age. If a Basenji gets sufficient mental stimulation and exercise daily, they will be happier and less likely to find destructive ways to occupy their time. Basenjis are very affectionate and are known to do very well with children. They have been known to bond especially close with one person. Basenjis are very protective of their family and make great watchdogs. They are reserved with strangers and will have to decide who is trustworthy on their own time.

According to the Basenji Club of America, Basenjis respond best to positive reinforcement training and do particularly well with clicker training. They will require obedience training, and if that is not something a caretaker wants to do at home, they may consider enrolling their Basenji in an obedience class. Early socialization is essential for all dogs and the Basenji is no exception. The more people, places, dogs, noises, etc. you expose them to early, the better they will be prepared for life later.