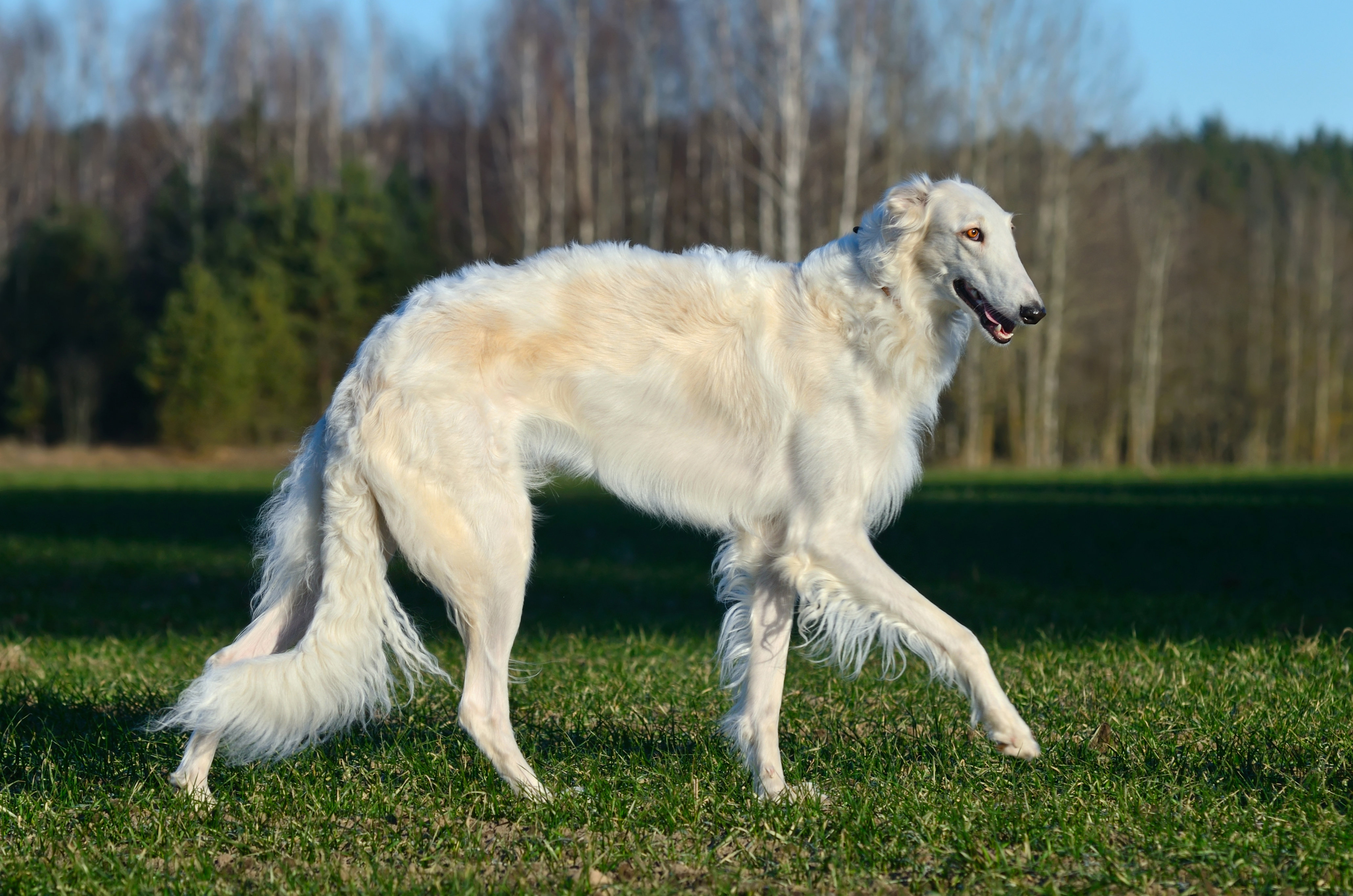 The Borzoi, also known as the Russian Wolfhound, is a majestic dog bred to course fox, boar, hare, and perhaps most impressively, wolf. These impressive sighthounds have been around since the 15th century, where Russian nobles such as Ivan the Terrible kept hundreds or even thousands of Borzois for hunting. During the Romanov rule of Russia, wolf hunting became extremely popular amongst the aristocracy. Huge events would be held on estates, where guests would be brought in on special wolf hunt trains. Of course, amongst these guests were hundreds of Borzois that were the main attractions.

All was well for Borzois up until the Russian Revolution in 1861. With the whole feudal system collapsing and the destruction of the aristocracy,  kennels were emptied and breeding ceased. In fact, this may have lead to the extinction of the breed had it not been for dog fanciers in the United States and England. These fanciers had been importing some of the impressive hounds leading up to the revolution. Without determined breeders and the dogs that had been acquired by them, the Borzoi would likely not exist today.

The term "borzoi" comes from "borzói",  the masculine singular form of an archaic Russian adjective that means "fast". In Russia, sighthound breeds weren't given actual names, but instead given a series of descriptive terms to differentiate them. The general term for sighthounds is "borzáya sobáka", meaning "fast dog". The modern Russian name for borzois, "russkaya psovaya borzaya", adds "psovaya", which is derived from the word for "wavy, silky coat".

Despite being incredible athletes, Borzois are actually very relaxed and laid-back at home. As long as they have their exercise requirements met, they are perfectly content lounging on the couch with you all day. This is an affectionate, family-oriented breed that loves spending time with its people. If your household is unoccupied for most of the day, this may not be the breed for you. Borzois are known to be a bit reserved around strangers, children, and sometimes other dogs. Proper socialization can prevent them from becoming outright shy or timid.

This breed is known to be gentle and sensitive, and rarely has problems with dominance. They respond best to human companions that treat them with respect rather than with yelling or punishments. They are also highly intelligent and a bit stubborn, becoming easily bored with training that is repetitive or apparently pointless. Training must be kept interesting for a Borzoi to be motivated to partake.

Borzois are large dogs with a long, slender, streamlined shape that is characteristic of most sighthound breeds. Their head is long, narrow, and slightly domed, creating a "Roman-nose" effect.

Their coats come in almost every color or combination of colors, including brindle. It is silky and flat, often wavy or slightly curly. The hair on their neck is longer and thicker than on the rest of their body, forming a curly frill. On their tail, hindquarters, chest, and back of forelegs, their coat is also longer and feathered.

Borzois live to be about 9-14 years old.

Borzois will shed lightly throughout the year with one or two heavy annual sheds that last a few weeks. Brushing them every few days with a brush or comb can help keep stray hairs to a minimum. During their heavy shedding period, more frequent brushing is necessary. Regular baths and nail trims will keep a borzoi looking elegant and healthy!

This breed is not known to be very vocal. They will likely bark occasionally, although certain Borzoi caretakers say their dogs never make a sound.

Borzois make poor guard dogs and watchdogs. They do not have guarding instincts, rarely bark, and may not even be suspicious towards an intruder.

Children and Other Pets

If you want to bring a Borzoi into a household with children or other pets, there are a few things to know. Borzois aren't a fan of rough play, and younger children may have a hard time understanding their boundaries. As a huge dog, there is also a risk of them accidentally knocking over small children. Borzois would do best in a household with older children.

To stay healthy and happy, Borzois should get about an hour of exercise per day. In addition to road walking, these dogs require a closed in space to run to get their energy out. This is easiest if you have a fenced in yard at your home, but a nearby dog park should do the trick. If properly exercised, Borzois are generally laid-back and calm in the house.

As sighthounds, Borzois will chase after everything that moves. This can easily lead them straight into perilous situations, such as running across a busy road. These dogs can also run extremely fast (36 mph), so despite your best efforts, you will not be able to catch them if they take off. It is extremely important that, if you get a Borzoi, you keep them on a leash when they are outside of an enclosed area.

These dogs are intelligent, independent, and sometimes stubborn, so training may be a challenge. According to the American Kennel Club, patience and consistency during training are key. The Borzoi Club of America recommends that, when starting obedience training, keep sessions short, interesting, and enthusiastic (think 2-3 minute sessions multiple times per day). Training should use positive reinforcement methods.

Early socialization is essential for all dogs and the Borzoi is no exception. Borzois may become wary of other dogs if they are not socialized with them from an early age. The more people, places, dogs, noises, etc. you expose them to early, the better they will be prepared for life later.

As sighthounds, Borzois will often take off after anything that moves. It is not recommended to let your dog out of an enclosed space without a leash. According to the Borzoi Club of America, teaching your Borzoi to come when called is the most important thing you can teach them. When getting a collar for a Borzoi, be sure to get a Martingale collar that is thick and padded so it doesn't dig into their neck and they can't slip out of it.