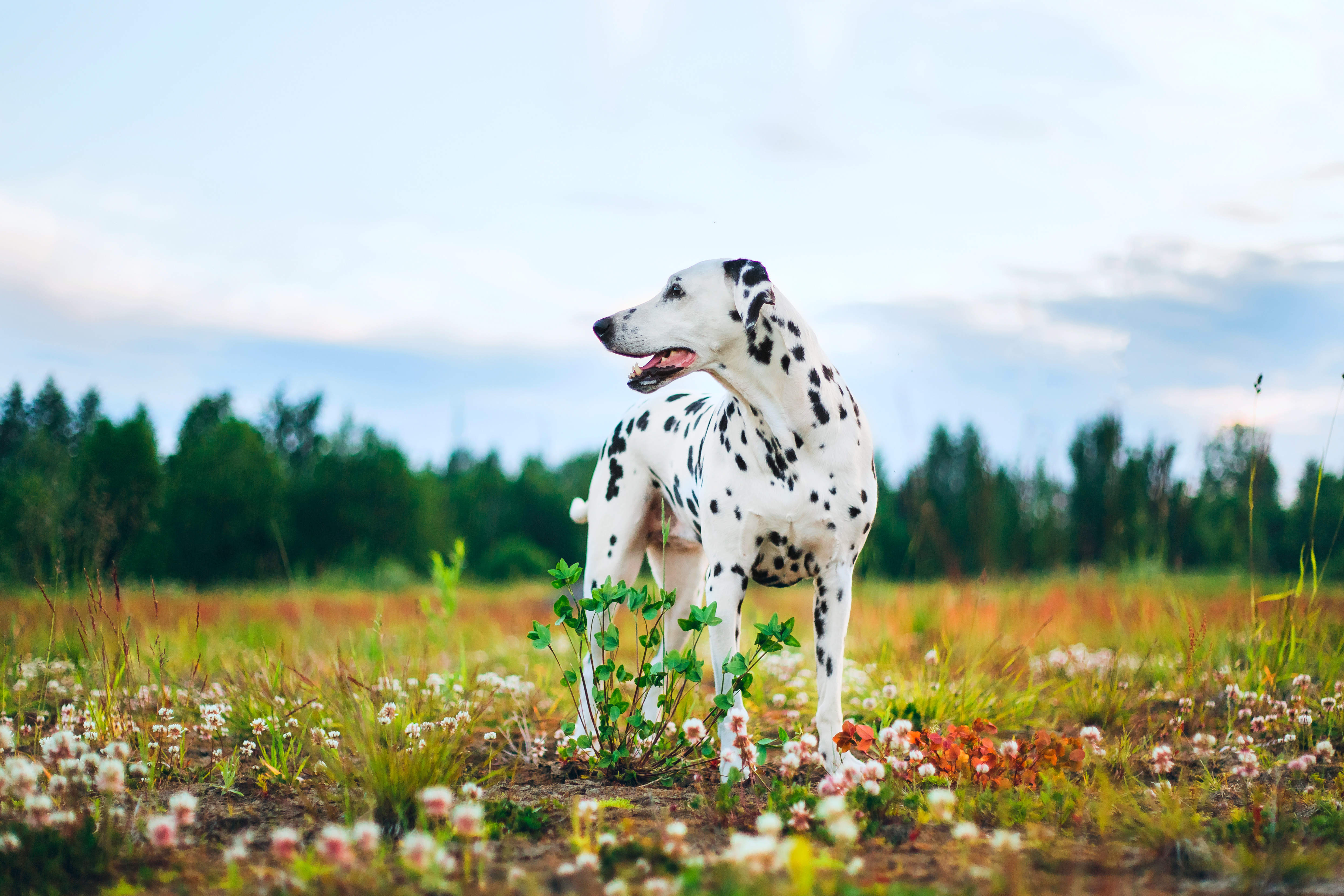 The origin of the Dalmatian is widely debated, although it is accepted that the breed has been around for centuries. Art and literature from Europe, Asia, and Africa all provide compelling arguments that they are the Dalmatian's place of origin. According to The New Complete Dog Book, a official publication of the American Kennel Club, Dalmatians were often found in bands of Romani people, working as coach dogs that would guard the carriages and horses. The nomadic nature of the Romani people likely contributed to the uncertaintly of where exactly these dogs came from.

Dogs unmistakably resembling Dalmatians appeared in illustrations from the 1600's in Croatia, the country that many experts consider to be the breed's place of origin. There was no written description of the Dalmatian until 1719, when Bishop Petar Bakić referred to the dogs as "Canis Dalmaticus" in church chronicles. The name "Dalmatian" first appeared in writing in 1771 from a book called Synopsis of Quadrupeds by Thomas Pennant.

Dalmatians are extremely versatile workers and have been employed in a variety of fields. According to the 18th edition of the AKC's The Complete Dog Book, "[the dalmatian's] activities have been as varied as his reputed ancestors. He has been a dog of war, a sentinel on the borders of Dalmatia and Croatia. He has been employed as draft dog, as shepherd. He is excellent on rats and vermin. He is well known for his heroic performances as fire-apparatus follower and fire-house mascot. As a sporting dog he has been used as bird dog, as trail hound, as retriever, or in packs for boar or stag hunting. His retentive memory had made him one of the most dependable clowners in circuses and on the stage. Down through the years the intelligence and willingness of the Dalmatian have found him in practically every role to which useful dogs are assigned."

Perhaps most famously, the Dalmatian is known as an excellent coach dog. This profession lead them to become a symbol of status in Europe during the Regency Period (1811-1820), when they would guard the horse-drawn carriages of wealthy travelers.  The breed's association with firefighters originated from their employment as firefighting apparatus escorts. Dalmatians form strong relationships with horses and were trained to run in front of the fire engines to clear the path and keep the horses calm at the sight of fire. These dogs would also guard the fire station at night from potential thieves.

The Dalmatian gets its name from Dalmatia, an Austrian province on the Eastern shore of the coast of Venice where certain researchers believe the breed originated as we know it today. Nicknames for the Dalmatian include the English Coach Dog, the Carriage Dog, the Leopard Carriage Dog, the Plum Pudding Dog, the Fire House Dog, and the Spotted Dick (the name of a traditional British pudding).

It is nearly impossible to get a Dalmatian confused with any other breed. Their dark, round, well-defined spots on a white background are unique to the Dalmatian. The Americal Kennel Club breed standard recognizes only black or dark brown (called liver) spots, although Dalmatians may be born with "orange" or "lemon" spots, which are varying shades of yellow. Generally, spots are spread out with minimal overlapping and are smaller on the head, legs, and tail.

Dalmatians are square-shaped, with the overall length of the body from the forechest to the buttocks being approximately equal to the height at the withers. Their ears are dropped. The rims around the eyes and the nose leather are fully pigmented in this breed, usually matching to color of the spots. Their eyes are brown, blue, or a combination of the two, and are generally darker in black-spotted than in liver-spotted Dalmatians.

Dalmatians live to be about 11-13 years old.

If you are averse to having dog hair on your clothes and furniture, we do not recommend bringing a Dalmatian into your home. These dogs shed year-round and heavily. In addition, their combination of black and white hair means that the hairs will stand out on your clothes no matter what color you are wearing. That being said, you can alleviate some of the fur dispersal by misting your Dalmatian with water before their regular brushing. It is recommended that caretakers of Dalmatians brush them multiple times per week to strip out the dead hair and keep their coat shiny and healthy.

These dogs are energetic, people-oriented, comical, and intelligent. Due to their energetic and intelligent nature, they require a large amount of physical and mental activity daily in order to stay happy and healthy. It is generally not recommended to bring a Dalmatian into your life if you live in an apartment unless you are able to dedicate a few hours per day helping them dispel their mental and physical energy. Otherwise, they may become bored, depressed, and/or destructive.

Dalmatians are very family-oriented and like to be involved in all family activities. This may not be the breed for you if you are away from home for large parts of the day or otherwise can't give your dog ample attention. They are known to do well with children, although they can be a bit rambunctious, so it's important to keep a close eye on them when they are interacting with small children. These dogs love attention and have a reputation of being playful and goofy- there is a reason they used to be popular in circuses!

Considering their alert nature, Dalmatians make great watchdogs. They may be reserved around strangers but should not be shy or aggressive. They are known to do well with other pets, but it is important for them to meet any other canine family member before living with one. Some have been known to be uneasy around other dogs.

The popularity of this breed has one unfortunate consequence- many Dalmatians come from irresponsible breeders who do not put the proper care into their breeding. Because of this, the breed is prone to many health conditions, including urinary tract issues and deafness. In fact, about 1/3 of all Dalmatians are deaf in one or both ears. Interestingly enough, this deafness is linked to the white color of their coat.

Dalmatians are high-energy dogs with an impressive amount of endurance and speed. They  require a greater-than-average amount of exercise each day to stay healthy and happy. As a general rule, 1-2 hours of exercise per day is recommended. Dalmatians are happy to play fetch, go on long walks, and even jog with their caretakers. It is important to note that puppies' bones are joints are not fully developed until around 2 years of age, so be sure to keep track of how much strenuous exercise they are doing.

According to Dalmatian Welfare, it is important to start training and socialization as early as possible. Dalmatians are large and energetic, and they may become a liability if they are not properly trained in obedience and socialized during their early puppyhood. The more people, places, dogs, noises, etc. you expose them to early, the better they will be prepared for life later.

As with all breeds, the best training methods involve using positive reinforcement. With Dalmatians, it is especially important to gain trust and build a positive relationship that does not involve harsh scolding or punishments.