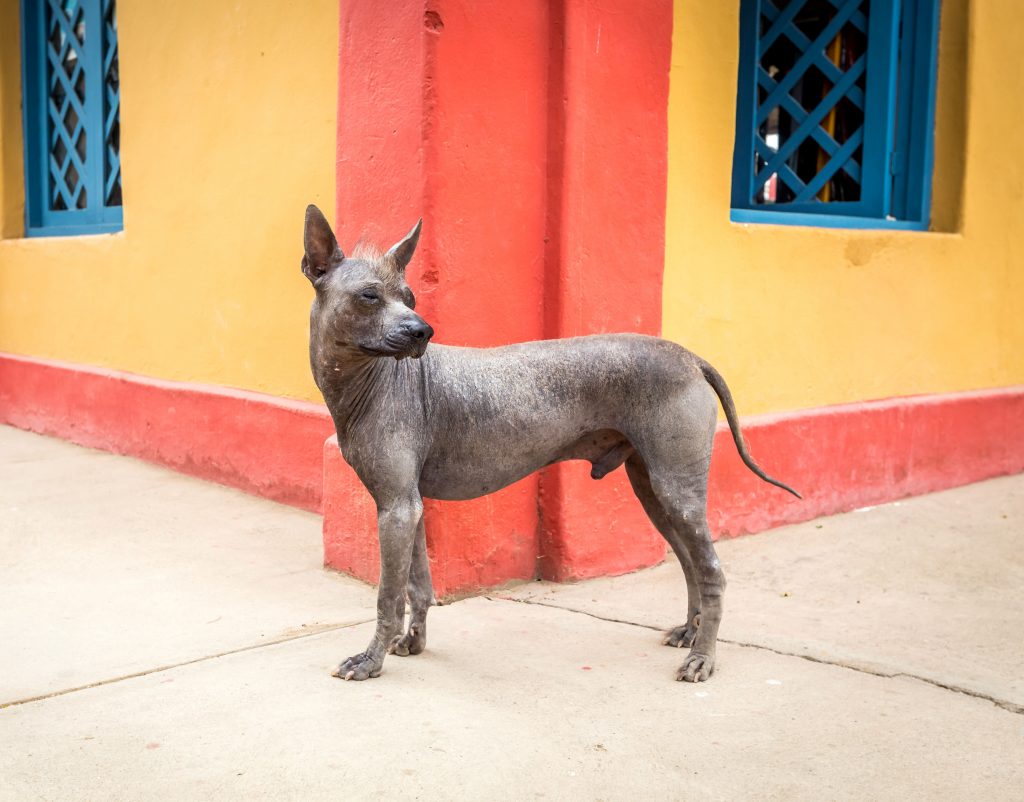 The Peruvian Inca Orchid, also known as the Peruvian Hairless Dog, Perro sin Pelo de Peru, and Perro Peruano, or Viringo Dog, is an ancient breed that originated in- you guessed it- Peru. While the breed is associated with Inca culture, the Peruvian Inca Orchid was also depicted in Chimú, Moche, Chancay, and Vicus art. It is believed that these dogs have existed since 750 CE as they were depicted on Moche ceramics from around this time. The Chancay people kept the dogs as companions, while the Chimú used them to heal people’s arthritis and other ailments. The Peruvian Inca Orchid’s lack of hair makes their body feel very warm, and it was believed that this warmth had healing properties. It was common for people suffering from arthritis to lay their hands on the dogs as treatment. Some cultures even used the dogs’ urine and feces in medicines. Along the northern coastal plains of Peru, it was common for the dogs to be eaten, although the Inca prohibited the practice when they conquered the region. The dogs were highly regarded and the remains of individuals have been found adorned in jewelry and buried alongside their owners. While the original Peruvian Inca Orchids were small, when the Spanish conquistadors conquered Peru, they interbred the native dogs with the dogs they brought with them. Eventually, 3 distinct sizes were established.

The Peruvian Inca Orchid gets its long name from the Spanish conquistadors that conquered Peru. They found the dogs within Inca homes surrounded by orchids, and thus called them “Perros Flora”, or “flower dog”. Over time, the name transitioned to Peruvian Inca Orchid, paying homage to their country of origin, the civilization that they emerged from, and the flowers that they became associated with.

The Peruvian Inca Orchid has a unique appearance. Most individuals are hairless, although some are fully coated and others have tufts of hair on their head, lower tail, and feet. Their skin can be brown, grey, copper, mottled, or completely unpigmented. The coated varieties can have any color fur. The Peruvian Inca Orchid comes in three size varieties- small, medium, and large.

Peruvian Inca Orchids live to be about 12-14 years old.

The Peruvian Inca Orchid is a loving, affectionate, and goofy breed that thrives most when it is surrounded by its family. In fact, they don’t like being left alone for more than a few hours without someone to keep them company. These dogs are lively, alert, curious, and highly intelligent. They tend to take a little while to warm up to strangers, but will come around on their own time. Peruvian Inca Orchids are known to be calm and laid back around the house but will still need adequate exercise to be happy and healthy. They make excellent watchdogs, alerting their caretakers of any strange activity or of anyone approaching the house. They also have a very strong prey drive, so be sure to keep them in a fenced in yard or on a leash when you take them outside. If you are considering getting a Peruvian Inca Orchid of your own, it is best if you don’t have any other small animals around the house. This breed is also relatively sensitive and is best suited for a household without young children, although they are known to do well around older children. They tend to be happiest in a household with another dog.

When it comes to training a Peruvian Inca Orchid, they are known to not respond well to harsh methods. Positive reinforcement tends to work best with them and they are generally eager to please when treated with kindness and respect. Early socialization is essential for all dogs and the Peruvian Inca Orchid is no exception. The more people, places, dogs, noises, etc. you expose them to early, the better they will be prepared for life later.

Due to their lack of hair, the Peruvian Inca Orchid is sensitive to the weather. They do not do well in the cold or rain and will need protective clothing. They also can get sunburns, so you’ll need to lather them up with sunscreen before you spend a day in the sun. If you have a yard that they spend time in, be sure to provide them with some shelter so they have some shade.