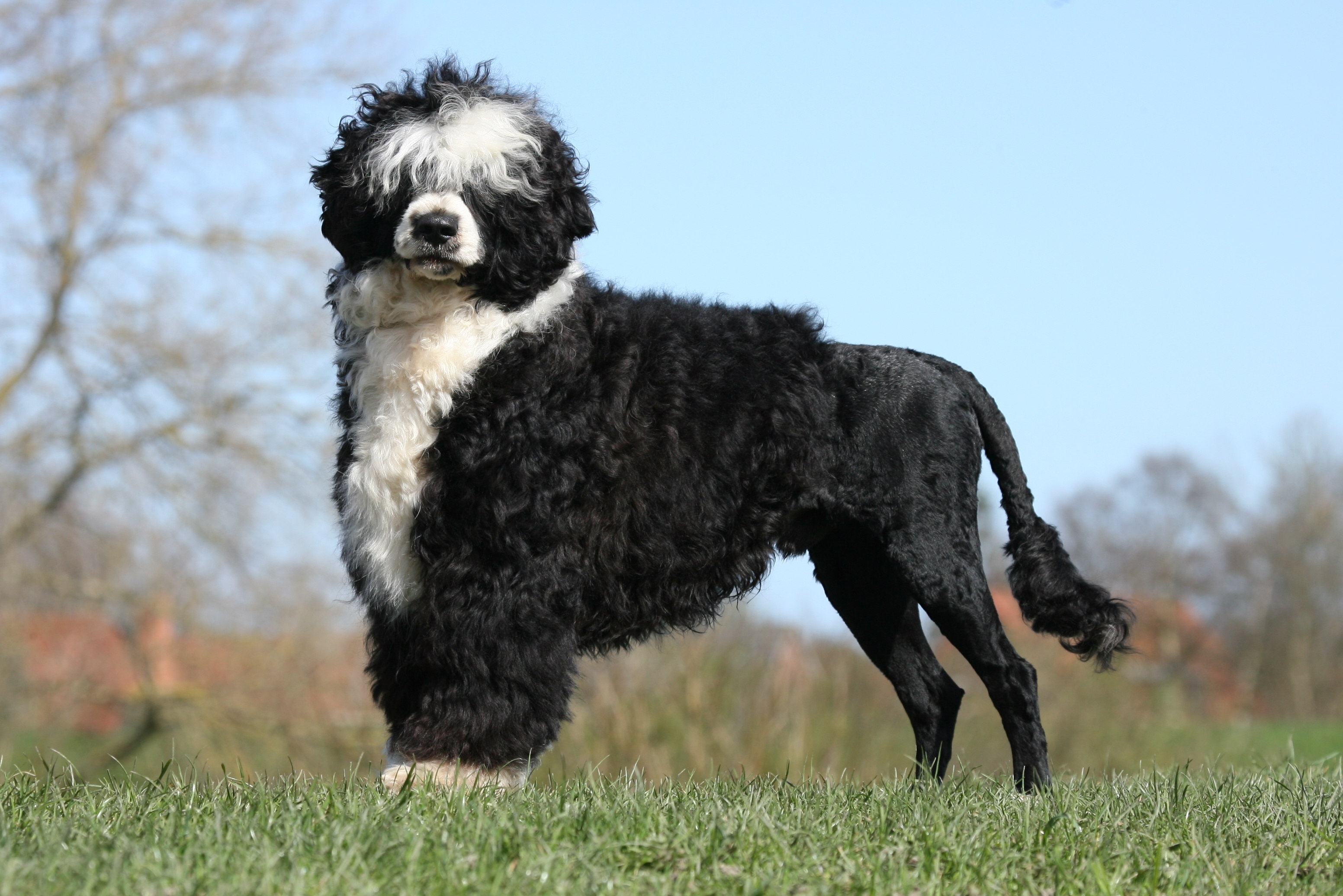 The Portuguese Water Dog originated in the Algarve region of Portugal where it was bred to assist at shipyards. These dogs were tasked with guarding ships, herding fish into fishermen's nets, retrieving lost tackle or broken nets, and acting as couriers from ship to ship, or ship to shore. They would sometimes travel with fishing crews from Portugal all the way to the waters off the coast of Iceland fishing for cod. The origin of this breed can be traced back to around 1297, when a monk wrote a report describing a dog that had pulled a drowning sailor from the water as having a "black coat of rough hair, cut to the first rib and with a tuft on the tip of his tail." This likely descibed the breed's predecessor, which is believed to also be shared by the poodle, Kerry blue terrier, and Irish water spaniel.

These dogs are excellent swimmers and seafarers, and are capable of diving deep into the water to retrieve fishing nets and keep fish from escaping nets. The breed's muscular build can be attributed to their strenuous, around-the-clock work schedule. In addition to their incredible work skills, fishermen also prized these dogs for their companionship. The intelligent, loyal, friendly dogs made great companions at home after a hard day's work.

In the 1930's, the Portuguese Water Dog was on the brink of extinction. Luckily, a wealthy Portuguese shipping magnate was determined to re-establish the breed. He collected dogs from fishermen in order to start a breeding program and, with the help of two veterinarians, was able to maintain a population of the bred in the country. These dogs did not find their way to the United States until the 1960's, and an official club was not established until 1972 by Deyanne Miller and her family. Today, the Portuguese Water Dog is a fairly rare breed throughout the world. The breed did, however, gain some stardom when former US President Barack Obama lived with two of them, Bo and Sunny, at the White House.

In Portuguese, the breed is called cão de água, meaning "dog of water." In Portugal, the dog is also known as the Algarvian Water Dog or the Portuguese Fishing Dog.

Portuguese Water Dogs are medium, muscular, stout-legged dogs with curly or wavy coats. Most dogs have black, black-and-white, brown, brown-and-white, or (rarely) white coats. A black coat with a white mark on the chin ("milk chin") and chest is the most common. Their coats can be either curly or wavy, with curly hair defined as compact, cylindrical, and somewhat lusterless. Wavy hair falls in waves and has a slight sheen. While their hair is naturally thick and even over their body, caretakers will sometimes opt for the "lion cut", where the dog's fur is cut shorter on the middle part, hindquarters, and muzzle, while leaving the hair on the tip of the tail long. Portuguese Water Dogs have large, broad heads, a thick, powerful tail that is used as a rudder in the water, and webbed feet that also aid in swimming.

Portuguese Water Dogs live to be about 12-15 years old.

This breed doesn't have a heavy-shedding undercoat, so shedding is minimal. Undercoat shedding is generally what allergy sufferers have problems with, so the Portuguese Water Dog is considered to be "hypoallergenic". That being said, they produce dander and their overcoat sheds lightly, so they may cause a reaction for some allergy sufferers. These dogs require at least a weekly brushing, regular bathing, and clipping/ grooming at the owner's discretion.

Portuguese Water Dogs are outgoing, curious, friendly, loving, and highly intelligent. They are high energy with lots of enthusiasm, and are known to be easy to train. In fact, they have a very long memory for object names and are capable of learning complex commands. They are gentle and patient but certainly not couch potatoes. They require frequent physical and mental stimulation to keep them from becoming bored. As a very family-oriented breed, they love spending time with their family and don't do well when left home alone for long. These dogs are known to get along well with kids, but very well could outlast children in a play session. Due to their high energy, they may be a bit exuberant during play, so it is important to keep a close eye on them if they're with children. As a working breed, they have a strong retreiving instinct and may be a bit "mouthy", with tendencies to tug and chew on things. They are also known to "counter surf", or put their front legs up on the counter if they smell food. These dogs make wonderful watchdogs, and while generally quiet, they will make a loud, booming bark when a stranger approaches the house.

As a working breed, these dogs are high energy and need lots of exercise. Long walks, plenty of play time, and dog sports are great ways to let them expell their energy. They absolutely love swimming and enjoy frequent visits to bodies of water. According to the Portuguese Water Dog Club of America, these dogs should have a minimum of two 20-minute free-running sessions per day. They also prefer to play with their owners rather than be by themselves, so a Portuguese Water Dog caretaker will have to be willing to dedicate ample time to their canine companion. They would do best in a home with a fenced-in yard and perhaps by going to a doggy daycare if their caretakers have to work during the day. Under-exercised Portuguese Water Dogs can become destructive and attention-demanding.

Portuguese Water Dogs are intelligent and learn quickly, so it is important that they begin training early. The Portuguese Water Dog Club of America recommends finding a training facility that that has instruction in puppy manners as well as the important lessons of Come, Sit, Down, Stay and walk on leash. A good training facility should also teach you how to train your dog. Crate training has been shown to be a useful tool when housebreaking your puppy. It is important, however, that they are not kept in their crate all day but only when they can't be under your watchful eye.

Early socialization is essential for all dogs and the Portuguese Water Dog is no exception. The more people, places, dogs, noises, etc. you expose them to early, the better they will be prepared for life later.