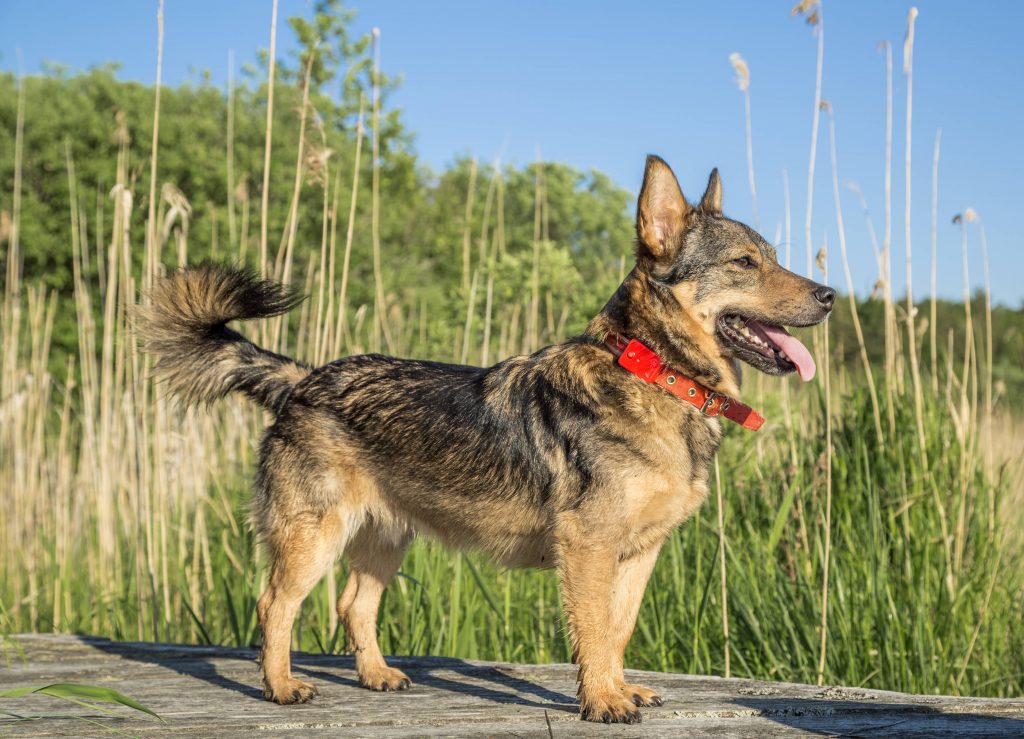 The Swedish Vallhund is an ancient herding breed from Sweden whose origin story is a bit murky. It is likely that the breed arose over 1,000 years ago during the Viking settlement of England when they were known as the "Vikingarnas Dog". During this time, these dogs were used as cattle drovers and herders, watchdogs, and guard dogs. It isn't clear what Swedish Vallhunds looked like at this time, but large dogs of similar shapes have been found buried with their masters in Viking-age settlements in Scandinavia. It is possible that these dogs (which looked like modern day Norwegian Elkhounds) were the predecessors of Swedish Vallhunds. The Swedish Vallhund closely resembles the Welsh Corgis in stature, and it is debated amongst historians whether the Vallhund contributed to the development of the Welsh Corgi breeds or vice versa.

Around 1942, the Swedish Vallhund was close to extinction. Luckily, a man named Bjorn von Rosen teamed up with K. G. Zettersten in order to save the breed. They scoured the country to find the best breed representatives that they could in order to establish a breeding stock. While bringing the breed back from the verge of extinction, the men were also able to bring national attention to the Swedish Vallhund. A year later, the Swedish Kennel Club officially recognized the breed. The Swedish Vallhund has since become the national breed of Sweden. Today, especially in the United States, they are very rare and difficult to acquire due to the scarcity of breeders.

The term "Vallhund" translates to "herding dog". In Sweden, these dogs are known as "Västgötaspets",  a name derived from Västergötland, the province where the breed was brought back from near extinction.

The Swedish Vallhund is a spitz-type dog with a wedge-shaped head and pricked ears. While their short stature is not as exaggerated as the Pembroke and Cardigan Welsh Corgis', they have a height-to-length-of-body ratio of 2:3. Their tails may be naturally long, stubbed, or bobbed, and some caretakers may choose to stub or bob a naturally long tail. Swedish Vallhunds have a short, medium-lengthed double coat with a rough outer coat. The coat is sable in coloring (colors can range from gray to red or a combination of these colors in various shades) with "harness markings", aka a band of lighter hair that runs from near the withers to behind the elbow.

Swedish Vallhunds live to be about 12-15 years old.

Be prepared for lots of hair around the house if you welcome a Swedish Vallhund into your life. They shed their undercoat twice per year, which produces a massive amount of hair. Bathing them during shedding and then blow drying and brushing them afterwards can keep the shedding under control. During non-shedding seasons, an occasional bath and brushing should be plenty to keep their coat healthy.

These dogs have ample energy to expend and even more love to give. They love spending time with their family and are quick to make friends with anyone they meet. They are very high energy and will require a fair amount of daily exercise; generally, they don't like living a "couch potato" lifestyle. With that in mind, the Swedish Vallhund's short stature can make extended running difficult, so opt for long hikes over long runs.

Swedish Vallhunds are intelligent, goofy, and playful, requiring frequent mental stimulation to keep them happy. They'll do some of the work themselves, often making up their own games to play with their family. Due to the breed's herding nature, they are very clever problem solvers. Unlike many herding breeds, they tend to be a bit more eager to please when it comes to training.

This is not the breed for apartment dwellers, as they bark. A lot. They also are known to "talk" to their owners by making other vocalizations. While they make great watchdogs, they are not aggressive towards strangers and therefor make poor guard dogs.

Swedish Vallhunds are known to do well with children as long as the children have been taught how to treat a dog (no ear pulling, etc.). They also are known to get along with other pets.

This breed responds best to positive reinforcement training and respond particularly well to clicker training. Despite their strong will, they are eager to please once they understand what you want from them and how they can work with you. Early socialization is essential for all dogs and the Swedish Vallhund is no exception. The more people, places, dogs, noises, etc. you expose them to early, the better they will be prepared for life later.