19 Foods You Might Not Know Are Unsafe For Dogs

Most people, even those who have never had a furry friend of their own, know that chocolate is toxic to dogs. However, there are plenty of other foods whose toxicity to dogs is less well known. Study up on foods that aren’t safe for your pup to keep them as happy and healthy as possible! If you ever think your dog consumed something unsafe, make a note of when and how much you think they ingested and call your veterinarian or the ASPCA Animal Poison Control Center at (888) 426-4435. 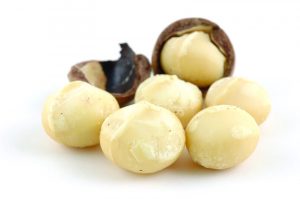 Macadamia nuts. While they might seem harmless, macadamia nuts are one of the most poisonous foods for dogs. Not only do they induce typical poisoning symptoms such as vomiting and lethargy, but they affect dogs’ immune systems as well. If you have any in your home, make sure to keep them out of your dog’s reach. 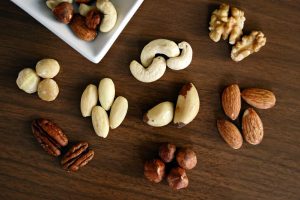 Other nuts, especially almonds, pecans, and walnuts. Besides macadamia nuts, other nuts contain high amounts of fats and oils which are not good for dogs. They can cause vomiting and diarrhea as well as pancreatitis in some dogs. 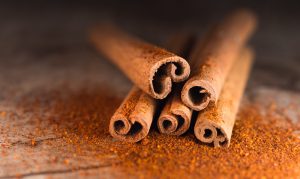 Cinnamon. While cinnamon is not actually toxic, eating cinnamon powder or chewing on a cinnamon stick can cause your dog’s mouth and digestive tract to become irritated. Breathing in the powder can also cause coughing and choking. Cinnamon has also been shown to decrease dogs’ blood sugar which can cause other problems. The Pet Poison Helpline says that about one teaspoon of cinnamon powder or much less cinnamon essential oil is enough to cause problems in most dogs. While it is not necessarily unsafe in small doses, it is probably best to avoid giving it to your dog altogether. 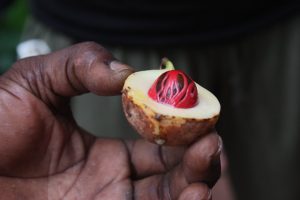 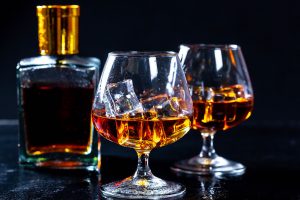 Alcohol. While it might seem obvious to not give your dog alcohol considering it is a poison for humans, it is still important to emphasize. In fact, dogs are affected by alcohol more intensely than humans are. If dogs ingest alcohol, it can lead to vomiting, diarrhea, decreased coordination, central nervous system depression, difficulty breathing, tremors, abnormal blood acidity, or worse. Make sure to keep alcohol out of reach of your pup. 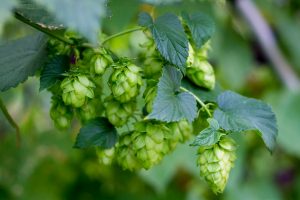 Beer and hops. Hops, a staple ingredient in most beers, can be very toxic to dogs. Dogs’ body temperature normally remains between 101-102.5 degrees Fahrenheit. According to the ASPCA, ingesting hops in any state (fresh, spent, dried, etc.) can increase dogs’ body temperature to above 107 degrees, which is considered life threatening. This can cause seizures and organ failure. In addition to hops, beer contains alcohol which is also harmful, so keep it away from your dog. 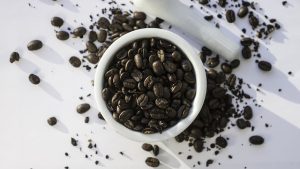 Coffee and caffeine. Coffee contains compounds called methylxanthines which are what make chocolate toxic to dogs. Methylxanthines can cause vomiting, diarrhea, panting, excessive thirst and urination, hyperactivity, abnormal heart rhythm, tremors, or worse. In addition to the toxins, caffeine can cause tremors, restlessness, stomach pain, and excessive bleeding in your dog. 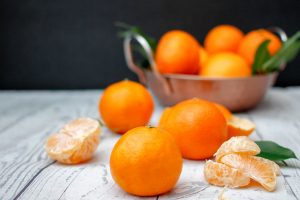 Citrus fruits. Lemons, limes, oranges, and other citrus fruits contain citric acid which can cause irritation and sometimes central nervous depression if dogs ingest significant amounts. The peels and seeds contain a higher concentration of citric acid than the fruit itself. While citric acid is not necessarily unsafe in small doses, it is best to avoid giving it to your dog altogether. 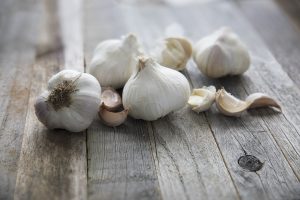 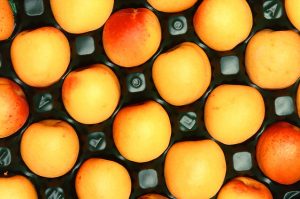 Apricots. Apricots themselves are not bad for pups, but the pit can be a choking hazard. Make sure to keep apricots out of your dog’s reach and if you decide to give them some, remove the pit first. 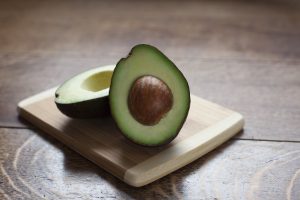 Avocado. While the soft green inside of an avocado is harmless, the pit and skin contain a toxin called persin. Persin can cause digestive upset in dogs. The pit also poses a choking hazard. 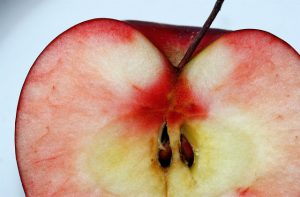 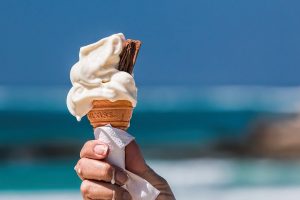 Dairy products. Most dogs do not produce enough lactase (the enzyme that digests lactose), and therefore are lactose intolerant. If you know that your dog is not intolerant of lactose, you can feed them small amounts of plain yogurt that is low in sugar with no artificial sweeteners. It is especially important to avoid giving your dog ice cream, which in addition to lactose, contains a whole lot of sugar which is never good for your pup. Luckily, some companies see this as an injustice and make ice cream especially for dogs. 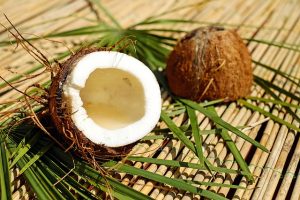 Coconut and coconut products. The flesh and milk of coconuts contain oils that can cause digestive problems in your pup. While the oils are not necessarily unsafe in small doses, it is probably best to avoid giving any to your pup. Coconut oil and coconut water should also be avoided.

Bones and raw or undercooked meat and eggs. Raw or undercooked meat and eggs can contain dangerous bacteria such as Salmonella and E. coli, both of which are also harmful to humans. Raw eggs contain avidin, an enzyme that decreases the absorption of biotin, an important B vitamin important for healthy skin and fur. The bones from meat can cause choking or other damage if they splinter while being chewed by your dog. If you want to give your dog a delicious animal product to chew on, you can buy pet-safe bones and hides from a pet store.

Salt-heavy foods. Too much salt is not a good thing, even for humans. Excessive salt can cause increased thirst and urination in your dog, and potentially even sodium ion poisoning. It is best to avoid giving your dog heavily salted foods, especially processed snacks that contain way more sodium than you might think.

Xylitol (an artificial sweetener). Xylitol is used as a sugar substitute in many sugar-free products, including gum, mints, and candy. It is also used in toothpaste to prevent tooth decay. You can find a full list of products containing xylitol here. In dogs, the pancreas confuses xylitol for real sugar and releases excessive insulin, causing a drastic drop in blood sugar which can cause seizures, liver failure, and even death. Even a small amount of xylitol can be toxic to your dog.

Yeast dough. Activated yeast dough releases two potentially harmful things while it is rising: gas and ethanol. The gas being released can accumulate in your dog’s digestive tract, causing bloat and possibly even twist, which can be life threatening. The ethanol released by the yeast can cause your dog to get alcohol poisoning.

While it might seem unfortunate that your pup can’t enjoy some of our favorite things (chocolate, coffee, AND beer?), there are plenty of other tasty treats that won’t make your dog regret their snacking choices. We recommend keeping all potentially unsafe foods far out of reach of your dog and keeping the phone numbers for your veterinarian and the ASPCA Animal Poison Control Center (888-426-4435) readily accessible. Being informed is the best way to keep your dog safe and happy!