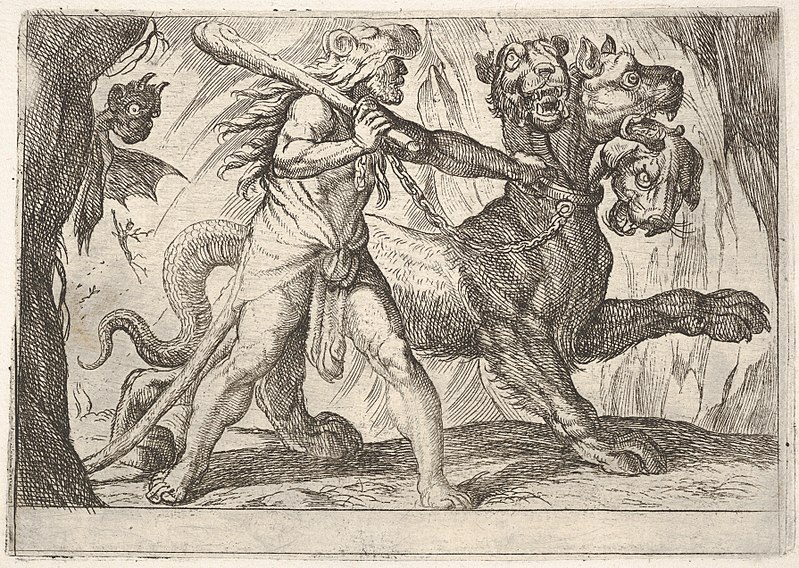 In Greek mythology, Cerberus was a multiple-headed dog that guarded the gates of the Underworld, the kingdom of Hades. This terrifying beast prevented the deceased from leaving as well as the living from entering. Cerberus was said to have been born from the beasts Echidna and Typhon, with multiple dog heads, snake heads growing from his back, and a serpent tail. While many artistic renditions show Cerberus with 3 heads, he was sometimes described as having as many as 100!

The "hound of Hades" had a family full of notable beasts. His mother, Echidna, a half human and half snake, was responsible for giving birth to most of beasts in Greek mythology. Cerberus' father, Typhon, was a fire-breathing giant covered with dragons and serpents that even the gods feared. Cerberus' had multiple siblings, including Orthus (or Othros), the Hydra of Lerna, and the Chimaera. Orthus was another hound but with a meager 2 heads compared to Cerberus' 2+, who was tasked with guarding the cattle of Geryon. The Hydra of Lerna, a 9-headed water serpent who could grow back 2 heads for every one that was chopped off. The Chimaera was a three-headed fire-breathing beast- part lion, part snake, and part goat.

While Cerberus was mostly adept at his job as the Underworld's gatekeeper, he was able to be tricked three times. Orpheus, in an attempt to save his deceased wife from the Underworld, was able to charm the beast with his music, granting him safe passage beyond the beast. Deiphobe, the Sibyl of Cumae, was an old woman over seven hundred years old who tossed a drugged honey cake to Cerberus, who fell fast asleep and allowed her to pass. Lastly, Hercules was able to conquer Cerberus with his strength.

According to myth, Hercules was tasked with capturing Cerberus for his 12th and final labor, bestowed upon him by Eurystheus. This feat was seen as impossible, which is why Eurystheus, who didn't want Hercules to prevail, tasked him with it. Hercules, of course, was not going to refuse. He headed for the entrance to the Underworld after making the necessary preparations.

After being granted passage across the River Styx from Charon, the ferryman of the dead, Hercules was able to meet with Hades. This hero was probably smart enough to know that people don't take too kindly to having their dogs stolen, so he resorted to humbly asking Hades if he could leave with Cerberus. Hades agreed under the condition that Hercules would have to defeat Cerberus wearing only a lion's skin and without weapons.

His grand plan: wrestle the beast. Hercules found Cerberus and, without hesitation, wrapped his arms around the multi-headed dog. Cerberus fought back, biting Hercules with his tail, but was unable to break free from the hero's strength. Finally, Cerberus accepted defeat and followed Hercules out of the Underworld. Luckily, the hound of Hades was mostly unharmed except for his pride, perhaps.

Triumphantly, Hercules brought Cerberus to Eurystheus who, at the site of the beast, was so scared he ran and hid in a barrel. Pleased with his completion of his final labor, Hercules returned Cerberus to his caretakers in the Underworld. A happy ending for all!

The etching above is titled "Hercules and Cerberus: Hercules grasps the collar of Cerberus, two demons appear at left," and is from the series 'The Labors of Hercules'" from 1608.