Why Do Dogs Tilt Their Heads? 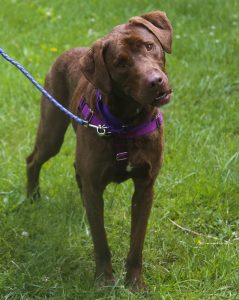 Everyone knows what we're talking about: that characteristic head tilt that dogs do where they appear to be confused. But are they confused? What's actually going on when dogs do this? According to certified applied animal behaviorist Jill Goldman, Ph.D., it's complicated. There are likely a variety of factors that contribute to this odd behavior, including visual and auditory factors.

While dogs have an exceptional sense of hearing, they are not able to pinpoint the location of a sound as well as humans can. Human ears are mostly stationary and shaped in a way that we can pick up sounds without having to turn our heads. Dogs, on the other hand, have to either move their ears or turn their heads to locate a sound. While humans only have 3 outer ear muscles, dogs have 18 that help them tilt, rotate, lift, and lower their ears. Tilting their head when they hear a sound may just be one extra way that they can pick up exactly where it's coming from. This may be especially beneficial for dogs with flopped ears (such as Cocker Spaniels) that inhibit sound waves reaching their inner ears.

This does not explain why dogs tilt their ears when directing their attention at something right in front of them. Dr. Goldman believes that in these cases, dogs are focusing less on localization and more on infliction and frequency. It is likely that they are trying to gather as much information as possible from the sounds we are producing. This may explain why dogs are especially prone to performing the ear tilt when the infliction and frequency of our voice change, such as when we're using our "baby voice".

Visual factors also likely play a role in head tilting. Dr. Goldman also studies primates and has found that in common marmoset monkeys, head tilting has much more to do with the visual cortex than the auditory cortex. Her research has also shown that the frequency of head tilting changes with age due to the visual abilities of the animal. It may be that puppies and geriatric that a more difficult time hearing and therefor will tilt their heads more often than a middle-aged dog.

Stanley Coren, Ph.D. in psychology and author of The Intelligence of Dogs, hypothesized that a dog's muzzle may also contribute to head tilting. Muzzles may obstruct the dogs view, especially of things right in front of them. Tilting their head may improve the ability of a dog to get a full view. Try putting your fist up to your nose and then looking at something a few feet in front of you. To get a full picture of whatever you're looking at, you would need to tilt your head to the side. To test his hypothesis, Dr. Coren conducted a study involving 582 dogs and compared their muzzle lengths to how often they tilted their heads. Results showed that while 52% of short-muzzled dogs (such as Pugs) tilted their head, 71% of medium-to-long-nosed dogs (such as Greyhounds) tilted their heads. Why did 52% of short-muzzled dogs still tilt their heads? Both Dr. Goldman and Dr. Coleman agree that this is a complicated, multi-factoral behavior.

While there are many functional benefits to a dog tilting its head, Dr. Goldman suggests one unexpected one: positive reinforcement. She says it may be that dogs tilt their heads more often than they would naturally due to how humans react to it. Think of all the "aww"s, ear scratches, smiles, and treats dogs get after performing such a cute action. It may be that the positive responses that humans give to the head tilt encourage dogs to continue exhibiting it.